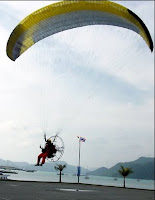 LANGKAWI, Nov 28 (Bernama) -- The Satun-Langkawi Paramotor Challenge 2010 will be merrier next year with more international participants are expected from Europe, South Africa and East Asia.

"We are proud that the Satun-Langkawi Challenge 2010 had achieved overwhelming success," he told Bernama after the presentation of prizes for the participants at the Baron Resort here Saturday night.

Basir also welcomed the proposal made by former Prime Minister Tun Dr Mahathir Mohamad for the Malaysian Armed Forces to use paramotor for their transportation and operation purposes, saying he was willing to share his know-how in handling a paramotor.

Posted by anaklangkawi at 9:04 PM